This is not a rant, but what does it take to be a Mum? Well more than you can ever imagine.

Just over 2 years ago I was blessed with my first, and 21 months later I had my second (birth control clearly is not on my side). Until then I actually didn’t realise or even acknowledge what a mum’s role actually was. When you’re just an observer everything looks so much easier and so much more rosier. I would watch as a mother begs and pleads with her child who is laying on the floor in Waitrose because he just feels like having a tantrum, I would snigger to myself and think that that lady really doesn’t have her sh*t together and my kid will never be like that, I would not be like that. Fast forward down the line and I find myself in Waitrose and my beautiful baby boy is balling his eyes, kicking and screaming in what one could only describe as, chaos.

So where has this post come from…? Over the past month I’ve met many different (new) and interesting women who happen to also be mothers themselves and almost on every occasion I’m asked; ‘So, what do you do?’. I’ve never been the one to ask whatelse someone does, and in all honesty it doesn’t interest me. The fact that you may be a doctor, great…! But will I envy you? Or respect you more than the woman who cleans my toilet? No, if I judge you, it’s because of the way I see you with your child, not some past life of academic or business success.

The first time I was asked the question this year,  was by a successful business owner and published blogger in Dubai, she explained how her small idea had grown into something unimaginable, and how she had managed to have 2 children in the process. After her unrequested sales pitch…she asked and my reply was as short as it is written, ‘I’m just a mum’. My immediate feelings were of shame and embarrassment that I was actually only a mum. How could I not have achieved anything? I started to make excuses and share what I hoped to be doing very soon my budding business plan and literary ambitions.

But now I realise, does it really matter? No. The other day my husband, as he was getting ready for work, as I was changing both two nappies whilst preparing breakfast, he looked at me and said ‘I know how I say it would be great to be a stay-at-home Dad, but really I don’t think I could do it’. I believe that was a compliment! I know I’m just a Mum, but being a mum entails way much than one can imagine, it’s the greatest job on Earth and surely the most important one, raising and educating the next generation. Why should we feel shame if all we do is sit at home? To all the mothers out there reading this, you’ll agree on any given day…sitting is the last thing that we do.

If you’re a working Mum, I have the utmost respect for you, seriously I don’t feel like I’m doing more than you. If you’re not working, and chosen to be a stay at home mum then there’s an equal amount of respect, now that I am a mum of 2, my days consist of at least 10 nappy changes, 7 meal preparations, baths, playgroups, playdates, naps, tantrums….and the list can go on and on…that’s just one day.

So, am I just a mum? No, I’m a superwoman. I do have dreams and ambition to do something but for now, my dreams and ambition are to watch my children grow, take their first steps, first words, and give them all of me (okay, because of that, I have to add a link to John legends all of me, simply sums up my love!) xx 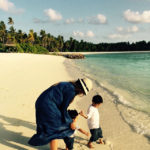