It’s okay not to be okay

It’s okay not to be okay – by Naziha Khawaja 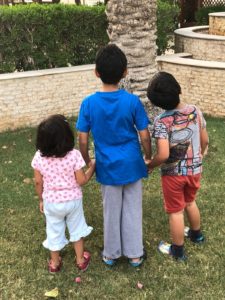 “That will never happen to me”, sitting in my GP clinic I thought as I absentmindedly stroked my bump.  I had just seen a patient suffering with low mood after having her baby, also known as postpartum depression. She had burst into tears, saying she loved her 4 month old daughter but was finding it all too much to cope with.  Her partner and friends didn’t understand why she couldn’t function as she previously did, as she was too tired and had lost interest in everything.

My thoughts that I would and should be able to cope, just like ‘everyone’ else were fairly naive and misconceived. Perinatal mental illness in general is common. Between 10-20% of all women will develop a mental illness during pregnancy or in the first year after having a baby (PRACTICAL TOOLKIT).  Anecdotally, my midwife later told me that this ‘should have been able to cope’ concept was fairly common amongst professionals, especially from vocational fields.

Just a few hours after our son arrived, all of our immediate family gathered into the labour room.  Everyone’s love, prayers and blessings were passed onto our new little family. However I quickly became uneasy, tired and just wanted everyone to leave.  Soon after my exhausted husband finally went home, it was just me and my little boy. I had no idea what to do with him, how to hold him, feed him, change him.  All I knew was I had to protect him.  Everyone was a threat, nursing staff, doctors, visitors, family.  Now I look back and realise my son was only 5 hours old when my mood changed.

Over the next few days and weeks, I suffered with all the usual hurdles faced by new mums.  Poor feeding, colic, tongue-tie, cluster feeding, sleep deprivation, nappy changes and endless burping.  I doted on him, taking photos from every angle, trying to capture every second that passed.  But I didn’t tell anyone why I slept with my glasses on and a light on.  I was convinced that someone would try to take him. I only let certain people hold him, and that mostly only within my sight. Nor did I say that I was scared to go out of the house with him.   I would find it difficult to leave my room, and I didn’t want to face any visitors who came to see us. I was terrified someone would notice what an awful mum I was.

I would cry all the time, always felt down and felt like I was a failure.  Some people noticed, others didn’t.  If I told someone the truth about how I was feeling surely they would take my precious little boy away? Every evening I would pray that I would wake up normal the next day. That I would be able to cope and smile and be like other new mums.  Facebook and the Internet were filled with picture-perfect moments shared by my friends and others with their idyllic babes in arms.  Everyone seemed to be coping and doing so well.  Whereas I felt like a failure as he was always crying and I couldn’t protect him the way I wanted to.

The only person I relaxed around was my husband. But he was back to work after two weeks of paternity leave like most dads.  He was also going through all of the same difficulties that every new parent faces.  We both had to get used to the sleepless nights, exhaustion, midnight feeds and nappy changes. And so it wasn’t easy for him to understand and appreciate how I felt. I spent most of the first year of my son’s life feeling alone and isolated.

Perinatal mental health issues can range from perinatal blues (that occur in about a third of women after having a baby), and perinatal depression to perinatal psychosis, which is a medical emergency.  It can happen at any time over a pregnancy or in the first year of a baby’s life, or be quite sudden.  Most women will suffer only mildly, and only half of cases will be reported to a health care professional.  Of these only half need treatment, most of which can effectively be done in primary care with your GP.  But many women simply don’t talk about how they’re feeling for many reasons.  These include:
– fear of stigma
– being thought of as a ‘bad mother’
– fear of the baby being taken away
– not knowing what help is available

There are multiple suggested reasons for mental health issues around what is thought should be a natural, joyous time.  Hormonal changes, lack of support, difficult childhood experiences, previous abuse, social distress and major life events can all be causative. In my case, I don’t think I’ll ever know what caused my postpartum depression. Although I had a very straightforward pregnancy, for some reason I struggled for a long time after having my son.

Although anyone can suffer perinatal mental health issues, those with depression, anxiety, PTSD or a pre-existing serious mental illness such as schizophrenia or bipolar disorder are at far greater risk, and should always be looked after by a specialist perinatal team throughout their pregnancy.

I managed to go back to work part-time as I had to finish the last few weeks of my GP training.  When my son was about a year old, I realised I needed help. I couldn’t function and was exhausted from constantly worrying all the time.  I realised that my mental health was having an impact on him, as his needs increased and he wanted to interact with others outsides of the safe boundaries I had set out for him.  I spoke to my GP who diagnosed me with postnatal depression and referred me for counselling and offered anti-depressants. We were also referred to a play centre, so I could take my son to activities in a safe environment and also to the local health visitor team.  Up until that point, I had never taken my little boy to any playgroups or classes or activities.

The consequences of perinatal mental health on women and their families can be immense. There is the impact on the women herself, both in the short and longterm.  The bond between mother and baby can be greatly affected, which can have longterm consequences on the longterm social and emotional development of the child in their formative years. Partners and extended family can also be affected.  Estimates suggest a third of new fathers worry about their mental health and up to one in ten have postnatal depression (nct).  New fathers are more likely to suffer with depression three to six months after the baby is born.  However early treatment and intervention can easily prevent adverse outcomes.

I was offered both psychological therapy and medication. Accessing counselling and psychological therapies varies on what’s available locally but is vital in providing support and treatment.  This alongside offering self-help resources such as access to mum/baby activities, postnatal exercise classes and massage, online CBT and online support groups such as netmums.com are often sufficient to provide help to most mums.  However some women need medication in addition to this. Generally women will be on one medication at the lowest dose needed.  If women are already taking medication for mental illness and become pregnant then they should keep taking it and immediately see their GP.

There is still so much stigma surrounding mental health.  One of the hardest things for me when I was getting through my difficulties and afterwards on the road to recovery, was the silence surrounding perinatal mental health.  Perhaps that’s why I’m writing this, as there may be someone else out there suffering in silence, who may benefit from my experiences.

Slowly through going through psychological therapy and getting support from my family, I gained the confidence to get the help I needed.  Speaking to someone removed from my situation provided a safe platform to allow me to process what had come to pass and understand it. Most of you reading this won’t know me, which in a way allows me to open us to the faceless reader, perhaps in a way that isn’t possible to those known faces. Some may understand, others may find it difficult.

Since getting help I have had two further beautiful children. Both pregnancies have been monitored by the antenatal team and postnatally in the community by midwives and health visitors.  Each time we have been more prepared by knowing what signs to look for and coping strategies.  Each time we have become parents again, we have learnt lessons from our decisions, not mistakes. I’ve realised that being a new parent is tough, and can affect your mental wellbeing in many different ways, some more serious than others.  There is nothing wrong with you, and there is nothing wrong with needing help.  Don’t suffer in silence.

Naziha Khawaja is a GP from London.  She currently lives in Doha with her husband and 3 kids.

If you need further information on post natal depression, then please take a look at the link below.

Please remember you are not alone, please reach out if you need someone to talk too.

To check out more mothers stories featured on the small print: Click here.

If you have a story to share, that you think could educate, support or inspire; please get in touch, I would love to hear from you whether you want to share the story anonymously or not – click here to get in touch

Thanks, it’s quite informative 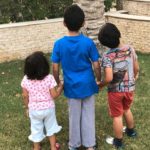 It’s okay not to be okay