You can never be too careful..

When a child is under your watch, as parent/auntie/uncle/carer, the child’s safety is the everything. Safety is something we often take for granted, especially at home. But, a safe environment can change in an instant…from closing doors, to curiously sharp (and little) objects.

Recently, a dear friend and super-mommy experienced the worst…in a matter of seconds her entire world turned upside down.  Once the worst was over, she wanted to make more people aware of the actions you can take when your child is in a situation like hers, and the importance of educating yourself further. Safety. Safety. Safety.

Her story:
Days after the most frightening experience of my life I would like to share it with you all to raise awareness of the risks of choking and swallowing objects in childhood.

As a mum of 2 young curious children I am all too familiar with Daiso and IKEA child locks. Last week I opened one in the bathroom to get something. My 2 year old daughter who was following me around the house as usual, took a little box out the cupboard and ran off with it.

Less than a minute later I went after her thinking there’s jewellery in that box. When I got to her she was sitting on the floor in the lounge playing with a bracelet. My 11 month old son was sitting next to her.

I looked at the open box and saw just 1 earring in it..ONE earring I thought? Wheres the other one?!
I quickly reached for my son who at that moment started coughing.
I put my finger in his mouth but couldn’t feel anything. He started choking and turning blue. I slapped his back repeatedly whilst shouting for my husband to call an ambulance. At this point he started coughing up blood. My mind was racing and going over everything I had learned about how to manage a choking child. All I could think of was airway obstruction – death or brain damage unless I get this out now. I’m looking at my child’s terrified face with tears in his eyes thinking is this it…are these the last few moments of my son’s life…No this can’t be happening! I kept slapping his back and squeezing his tummy and chest in an attempt to dislodge the earring. He was not moving but he was breathing a conscious.
We took him to the nearest medical facility, Saudi German Hospital, where they carried out an x-ray showing the earring lodged at the top of the oesophagus (food pipe), and thankfully not in his airway.
The next dilemma was how to remove the earring. The danger was that it might tear a hole in the oesophagus which could have been potentially fatal.
We were told to go to Dubai Hospital in Deira where they had the specialists required to manage his case. So at 7pm on Thursday evening we had to get across Dubai in peak traffic which would have taken 2-3 hours. We called an ambulance from the hospital car park  which arrived within 4 minutes and took us to Dubai Hospital within half an hour.
(Even as a doctor I find the medical structure in the UAE difficult to understand so one piece of advice would be in any type of emergency the safest, fastest thing to do is call an ambulance. In most cases they will take you to Latifa, Rashid or Dubai Hospital depending on where they are best equipped to manage the case. The ambulance staff were sensible and supportive and the response time was very good.)
After several more x-rays and discussions with specialists they told me that my son would need to go to theatre to have it removed.  Due to the risk of perforation they had an intensive care bed ready for him. All I could think of was the worst case scenario if there were complications.
As I carried him to the operating theatre I held him tight thinking this may be the last time I see my son as he is. Then I sat outside and waited…Despite years of medical training I felt helpless. All I could do was pray.
Ahamdulillah approximately half an hour later the ENT surgeon came out and told me that they had managed to remove it without causing any damage. I cant explain the sense of relief. I wanted cry and laugh and hug him all at the same time.
I had been blessed all over again.
As a precaution they kept him in for 2 days and he was not allowed to eat or drink during this period. You can imagine how hard it is to stop a baby from having milk for 2 days.
When we were able to feed him Alhamdulillah there were no signs of complications or internal damage. We were discharged home that evening and the nightmare was finally over.
I’ve thought about the incident and played it over in my mind thinking what if … and if only… but Allah knows best and everything happens for a reason.
I wanted to share this ordeal with you to highlight how it literally takes seconds for children to come into harms way. You can never be too careful. I never expected this to happen to me, to my child. It’s the sort of this I’ve heard about or seen at work.
I am one of the very very lucky ones. It could have ended so much worse.
Below is some guidance on how to manage a choking baby. I pray that none of you will ever experience this or have to use it.
May Allah protect all our children from pain, suffering or any form of adversity.
Allvia 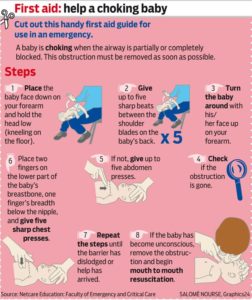 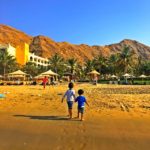 You can never be too careful..